Welcome to the website for Rick Drost, a Singer/Songwriter based in Cambridge, MA.  Here you'll find
- Schedule information,
- Recent tunes with lyrics,
- Photos -both of performances that kind folks have contributed, and some that I try to collect whenever I go someplace to sing.
- There's Biographical information, Contact Information, A mailing list if you're interested.
- I'll try to post infrequent musings on various subjects in the blog.

Mostly, enjoy the tunes - i write slowly; hopefully the tunes reward repeated listening.
Thanks for dropping by.

For Valentine's Day - From Public Garden Swans to All Lovers

A while ago the Boston Globe published a story on the swans in the Public Garden.  It turns out that the swans, known the world over as Romeo and Juliet,  are in fact two females, and even hetero swan couples trade off on the normal gender-related roles.   I went down to meet the swans, fell in love with their easy tranquility and their exquisite surroundings. I visited them morning, noon, and evening, (it was summer) and wrote them this valentine, Juli and Romy. 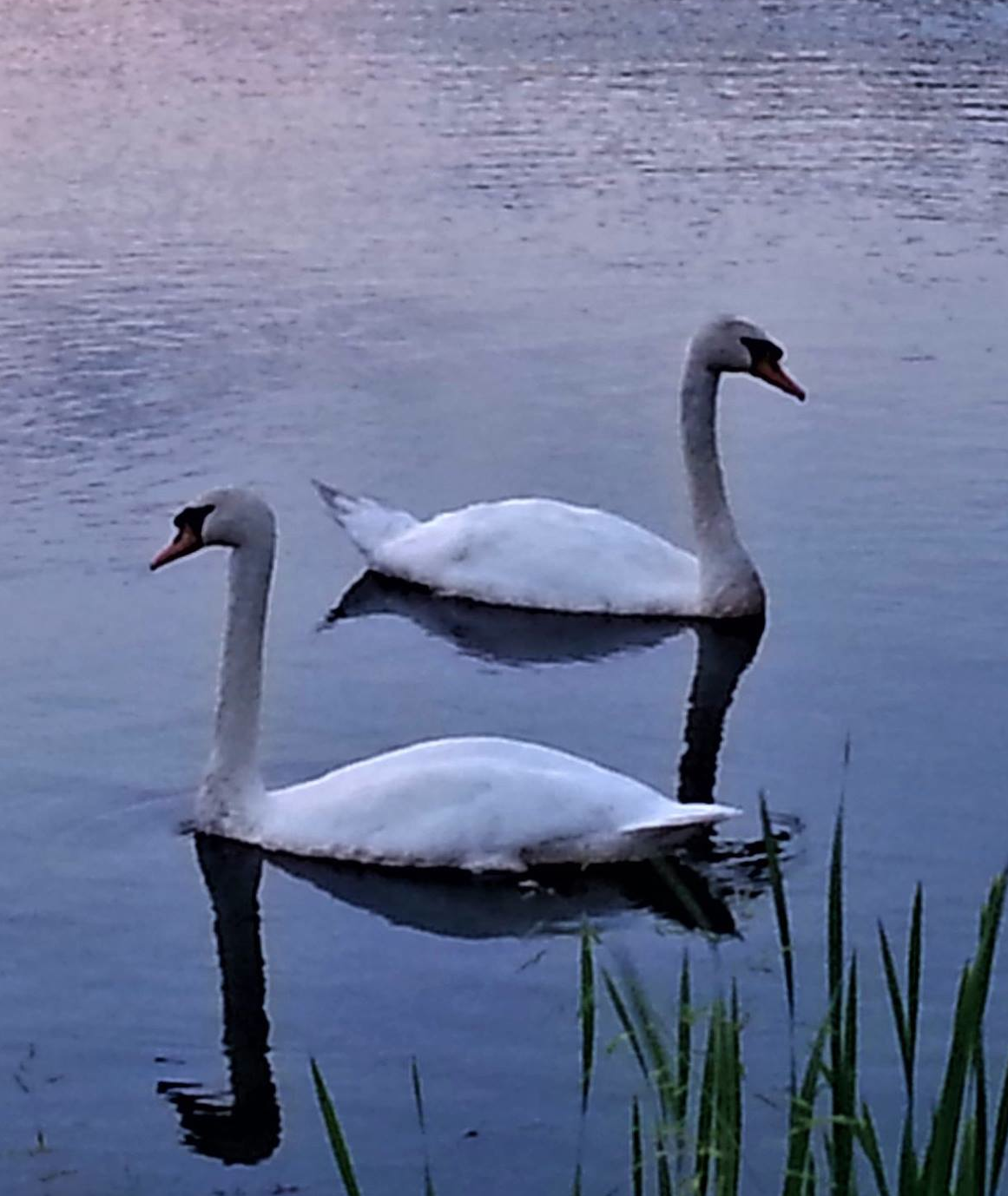 Dad Built us a Freezer

My father Wilfred passed on on Feb 11 at 96, in a nursing home in Atlanta where he was well cared for.  Many of the family sang songs at his Memorial service, but there was more to this man than love of music. This note started in one of my "daily writings" a year ago; I'm hoping it captures some of Dad's character, his positive problem-solving character and love of life and family.

Dad Built us a Freezer

What can you do in 1953 with Oak and Masonite and Aluminum Sheeting and Cork and Copper Tubing and an old used compressor and a lot of know-how?
Build a freezer for your family in your basement.

My father was an engineer, a  master of know-how. For work he designed and built equipment to implement chemical processes - processes as diverse as fabricating star sapphires and rubies to making little beads of treated clay that keep your refrigerator coolant dry and your double pane windows clear. Dad worked for Linde Air Products, which got its start cooling, liquefying  and separating air into its components. Freezers of all sizes abounded there, as well as good people to learn from.

Since family came first, here's my guess about how this started in his mind. "Wow, this refrigeration equipment is actually pretty simple. Just an insulated box with cooling coils and a compressor. If I could build one in for the basement Mom could put up food from the garden and local orchards that we love in the summer, and we could buy food in bulk too and keep it in there, and have it all winter."
So he built from scratch a home freezer (we called it a deep freeze) which ran in the basement from about 1954 until they moved to Alabama in 1968.  So for the forty days and forty nights of the snowy Buffalo winter we (Mom, Dad, Paul, Rickey, Martha, Barbie, and later Ellen) had strawberries, steaks, venison, quick frozen fish, green beens, even corn on the cob from that freezer. I have no idea what the people who bought the house thought of it. It certainly didn't look like anything Betty Furness would have advertised.

It was a large box, in cubits, roughly 5 long by 3 high by 2.5 deep. (maybe 8' by 4.5' by 3.5' ), Masonite painted white on the outside on a frame of varnished oak. I remember him showing us when he placed the dark, creosote-y smelling cork blocks inside for insulation; he even let me put one in. Then it was lined with aluminum sheeting. Then copper cooling coils, all around inside, about halfway up, and a copper quick-freeze plate on the left end.  I don't remember where the coils were fabricated. He probably had a friend from the lab make them to spec in HIS home workshop; he might have done it all while we were sleeping, at least assembling it from parts.  He could handle all kinds of torches to at least do finish fitting on the coils. Rubber gaskets sealed it all around the frame at the top.  The top was the same composition as the box itself, Hinged, not spring loaded at all.   There was a big cast iron ring in the center of the top.  It took us two boys to open it - one would start lifting it with the ring, standing on the step of 2x8 that he'd built running the length of the box, the other caught it and lifted from the top of the basement steps to push the top to the back wall.   Same way back down. Always with care.  The compressor was a huge thing looking like it might have come from Carl von Linde's workshop.  It was outboard of the box under the back basement stairs, with a trap door cut in the top platform for maintenance access. I only remember one time we had to maintain that compressor.  They don't make anything like they used to. The steps of the stairs were also all hinged to make storage for all the kids' winter boots and skates.

Elementary and Junior high summers, then, the boys had a popsicle business out of the freezer. Dad had found moulds, showed us how to mix Koolaid, cut and smooth sticks from dowels and tongue depressors. At peak times we'd set the alarm for 1am, go down there to wrap one batch and reload the moulds, getting up early so we could repeat the exercise before school. We sold them on our bikes around the neighborhood for 2c and 3c for the larger ones. Bought Koolaid and raw materials for sticks with the proceeds. Dad estimated what we would have to pay for the electric to get the freezing done, but I don't think we ever paid but once. Or made any real money. But the goodwill of the business might have kept us out of some neighborhood water balloon wars.

There were other do-it-yourself projects that yielded things that kept us kids occupied and amused - the little boats for the boys made from 50 gallon oil drum cut in half. The pump and pump house down by the creek, with buried lines with which we kept the garden and the flowers watered, the Cable Car strung down the hill between the big oaks, which let us send rocks and other materials down the hill to the creek and garden level in a wheelbarrow harness, and gave us rides sometimes, the tow rope hanging from the big oak down by the creek which we could swing on, the archery butt against the hill behind the house.

All these things he showed us gave us confidence we could figure out how to do things and find help getting them done that could improve our lives.  Dad didn't do it expecting praise. He never stood on a hilltop saying "I built a freezer", "I made star sapphires", "I can play Claire de Lune". He just continued producing things of utility and beauty to improve the lives of people around him, and  enjoying every moment of it all that he could take in.

Produced by Jon Shain and engineered by FJ Ventre, (Durham, NC) who add guitars and basses to Rick's

(Rick: Guitar and Vocals, all tracks; FJ Ventre Basses, all tracks) 1. Don't Remember Train (3:37) - started in a dream; Rick hasn't awakened yet; percussion; 2. Turning the World (4:52) - Starts in the Australian outback, comes around the world and back home; a song for peace, and listening to each other; cello. 3. Old Player Piano (4:26) - dedication to playing music; nostalgia and beyond. Piano, Accordion 4. Wyethstown (4:39) - from the standpoint of a woman coming of age in the Boston valley area of Western New York, ca. 1850; cello 5. Got a Little Corner (3:35) - faux-country song from a jilted lover to his rival. Harmonica; FJ and Jon Vocal backup 6. Pictures on the Wall (4:37) - a song of letting go, or not. guitars, bass, piano 7. Revendon (4:30) - an ode to misspent youth; bowed bass, piano 8. Lucky Lobster Rag (4:00) - Celebration of Whole Foods' (imagined) treatment of live lobsters they decided it was immoral to sell. Soprano Sax; percussion; Jon and FJ the "lobster chorus" 9. Juli and Romy (4:37) - Valentine to the pair of female swans in the Boston Public Garden, known the world over as Romeo and Juliet. cello; accordion 10. Still Point (5:01) - an ode to meditation - where it comes from, how it starts, how useful it is. Piano, Bass 11. Buffalo (3:01) - semiautobiographical rocker, with Jon: Guitar, Doug:Piano; Ed: percussion 12. Seasons Search 5:38 - Rick's Saga Song; Jon: mood guitar, Kaitlin: cello; FJ: bass and keyboards 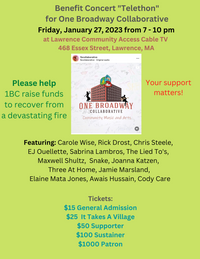 Linda Marks has organized a benefit for One Broadway Collaborative, which was recently damaged by fire. Ten Songwriters will perform at Lawrence Community Access TV. Max Shultz, comic, will MC and perform 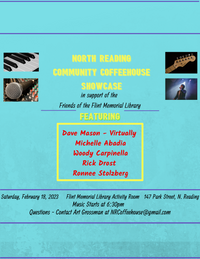 Donations will support Friends of the Flint Memorial Library Come join us - this is a very friendly monthly event.